I recently purchased a 1985 Fleetwood Prowler camper. Overall it seems to have been well-kept through the years, but a hail storm in 2017 destroyed the plastic cover over the ceiling vent in the rear bedroom, and as a result there was water damage to the roof and the back wall around the bed. The moisture has evaporated entirely—it's semi-arid here in Colorado—but there's a lot of rot remaining.

I would like to completely renovate or even rebuild the camper, pulling out all the furniture, fixtures, and interior walls, etc., but since I have a somewhat limited budget, I need to find frugal ways of repairing, modernizing, and personalizing it. Oftentimes the brainstorming that's necessary when working on a limited budget results in small, but meaningful innovations in the project that otherwise wouldn't have been considered. Part of the fun is finding ways around such constraints.

An interesting aside: the original brochure from the RV dealer for the 1985 Fleetwood models has been preserved inside the camper. My camper is the Model 20J.

When I purchased the camper, it had the standard particle board dinette table in a vintage drab brown. Rather than building a new tabletop using real wood (and thus increasing the weight) or buying another particle board table, I decided to use decoupage to renew the existing table. As I was searching for papers or books to cover the tabletop, I found volumes 8, 9, and 10 of the Book of Popular Science encyclopedia that my father had when he was younger. This particular set was published in 1963 and contained many vintage science images, graphs, and illustrations—perfect for refinishing the table!

I briefly considered using the encyclopedia's reference section for the tabletop, the result being that when I needed to look for a particular constant, formula, or idea, I would consult my camper table! Instead, I selected the most appealing images—in my opinion—and compiled those together to cover the tabletop. I ultimately covered both sides of the tabletop, using the bottom side as a testing area, since I had never worked with decoupage before.

Using supplies purchased at my local craft store, I quickly discovered that a cheap plastic brayer/roller is relatively useless for smoothing the pages as they are glued down. In my case, the plastic brayer continually lost traction and with only minor pressure applied to it, would grind to a halt, scraping the paper rather than rolling over it. I ordered a much stronger brayer with a thick rubber roller and a stainless steel handle, which was more than capable of handling the extra pressure I was applying.

After gluing the pages in place, I applied four coats of "exterior" decoupage glue, and I plan to use a high gloss finisher on the top side of the table to make it shine. 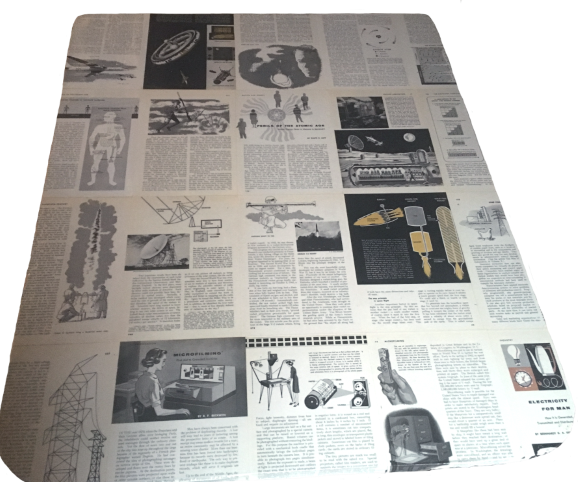